This March, I presented a workshop on composting at WOMADelaide 2016. It was a very big day that began early with dropping off all my props and gear, and finished with a rush of adrenaline in the late afternoon as I realised that it was all done. Nothing went wrong – in fact everything had gone right, and it was so much fun!

My workshop host was Deb Tribe, a fantastic presenter from 891 ABC radio. We met face to face only an hour before the workshop was due to start but she put me at ease straight away. Now, I’m used to presenting in front of a PowerPoint presentation. Usually without props, not much movement and no-one else doing any speaking.

This was very different!

The Speakers Corner stage dedicated to this year’s Planet Talks and workshops had so much infrastructure: couches and comfy chairs, trestle tables, side tables and plants all round the edges. When running through the workshop plan with Deb, she suggested we start sitting down and talking, then move over to the trestle table covered in all the composting examples, and finally move back to the couch to finish. And it wasn’t just me talking. This workshop was a conversation between Deb and I. A back and forth, with her asking questions to clarify things I was doing. To top it off we even had 3 volunteers up on stage to help build an example compost heap right then and there. The young boys that jumped up to volunteer all thought the smelly compost ingredients (like manure) were hilarious!

And it went brilliantly. I had a shock the first time I opened my mouth to talk and looking away from Deb realised that the place was full. It felt wonderful being able to read the audience, to watch their faces, bounce off their reactions and really have fun with it. We covered everything we meant to within the hour and even had time for questions – some of them really curious ones. Later on I was told that the workshop had been filmed and projected up onto a big screen up the hill where even more people had been camped out watching us.

I had the absolute best time and can’t wait for my next experience. 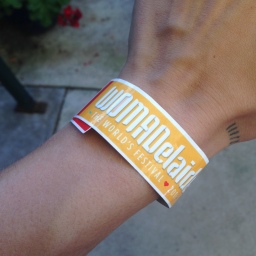 The best volunteers – loving getting their handy dirty. 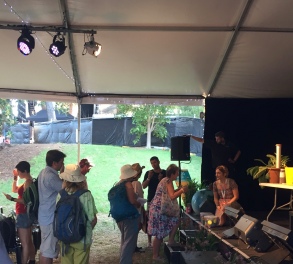 So many questions asked at end.

...my journey to purposeful self-discovery